Getting the Vineyards Ready: Pruning

Getting the Vineyards Ready: Pruning 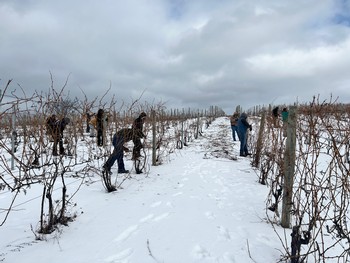 The 2022 growing season is set to begin soon but before it can start, the vineyards need to be prepped for new growth. There are many steps in preparing and caring for the many acres of vineyards that Good Harbor Vineyards operates, but one of the most important steps is pruning. Pruning is the first process in the growing season where the vineyard team cuts off dead or unwanted parts of the vine from the previous season to prepare it for new growth.

In reality, grape vines are able to produce 800% more fruiting material than they are actually able to ripen. When it comes to growing grapes, viticulturists are more concerned with the quality of the vine than the quantity. Harbor Hill Fruit Farms President Sam Simpson explains an easy way of remembering the importance of pruning is by saying “If you think of a vine in terms of constructing a house, pruning would be the solid foundation you are putting the house on. If you don't do this, the rest of it won't really matter.” 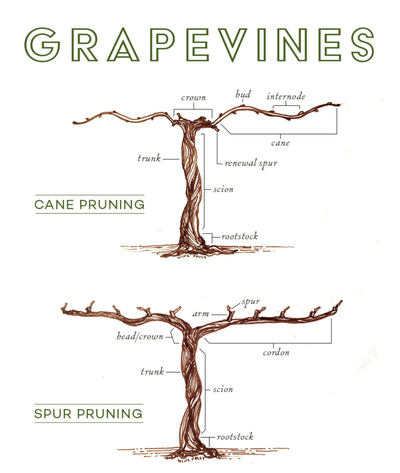 (The above infographic is from winefolly.com. It shows what section of the vine gets clipped when doing cane pruning and when doing spur pruning.)

Cane Pruning
Growers in cooler climates, such as Oregon, New York, Germany, Austria, and Michigan, will commonly use cane pruning in their vineyards. Cane pruning allows crews to manually cut back nearly all the vine’s prior growth and correctly select a single cane that will be responsible for next season’s productions. Experts say that by limiting the vine’s lignified growth, the vine is less vulnerable to frost and better protected than spur pruned vines. Many of the world’s most prestigious wine growing regions have adopted cane pruning versus spur pruning.

Spur Pruning
Unlike cane pruning, spur pruning is more commonly found in warmer climate growing regions, such as California, Italy, France, Argentina and Spain. The many different styles of spur-pruned training methods are used for everything from table grapes (high production) to fine wine (low production). The spurs - which is the stub of a cane that contains 1 to 3 buds - are generally easier to prune. Growers would generally use the method of spur pruning as a more traditional training method to produce outstanding old vine wines. 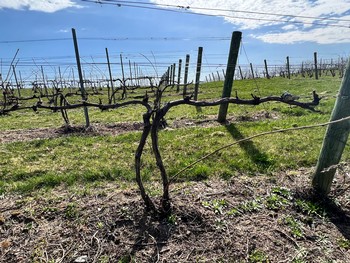 The vast majority of Good Harbor’s vineyards are cane pruned and trained to vertical shoot position (VSP) style of management. Since Michigan is in a cool climate, “we are most concerned with allowing for as much sunlight and warmth into the canopy,” says Simpson. In many of the hotter growing regions, they are most concerned with too much heat and what it does to the development of the fruit. While warmer climate growers go through and spray what is essentially a sunscreen on some of their grapes out west, we are “suns out, guns out in Michigan!”

Commenting has been turned off.