The Important Role of Migrant Workers at Good Harbor Vineyards

The Important Role of Migrant Workers at Good Harbor Vineyards 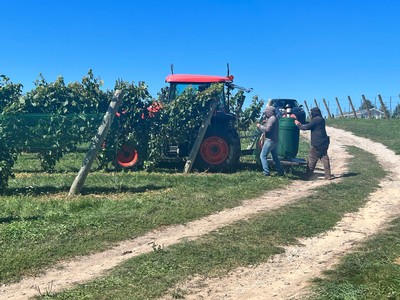 For generations, migrant workers have been coming to Michigan to help the local farmers tend to their fields - whether it be corn, strawberries, cherries, or grapes.

At Good Harbor Vineyards, migrant workers have come back year after year to work in our vineyards - currently employing 20 H-2A seasonal guestworkers. The H-2A visa program “is a temporary agricultural program that allows agricultural employers, like the farmers in Northern Michigan, who anticipate a shortage of domestic workers to bring nonimmigrant foreign workers to the U.S. to perform agricultural labor or services of a temporary or seasonal nature.”

Co-owner Sam Simpson said, “The H-2A program allows us to exist at this point because there is not a domestic agriculture labor pool for us to draw from.”

Migrant workers started working for Harbor Hill Fruit Farms in the 1970s when the main focus was on cherry orchards. The need for more migrant workers grew when Harbor Hill made the transition from cherries to grapes as the winery grew. Grapes were more labor intensive for a longer period and required more refined hand labor.

The increase in labor along with the longer season allowed migrant workers to stay in Leelanau County longer into the year. Typically, cherry season is over in August so migrant workers would head south to work on a variety of other farms before the fall weather hit the area.

Since grape harvest isn’t until early to mid-October, many migrant workers were able to stay in the area longer and eventually establish a new life within the community.

One of Harbor Hill Fruit Farms’ head crew chief’s, named Ovidio Chapa, was with the company for 42 years. During his four decades of service with the Simpson Family, he was able to work and raise his family in the Leland area. His children, grandchildren and great-grandchildren either still attend or have attended Leland schools and continue to thrive and contribute to the Leelanau community.

While migrant workers help our business tremendously, they have also helped shape the cultural foundation of the Leelanau County region.  The school and communities have been enriched and strengthened with the growth of Latin American families who have decided to make the Leelanau Peninsula their home.

History of Migrant Workers in Michigan

While Latin American immigrants really started coming to the United States to work in the fields in the 1970s, it was 1915 when the first Latin American migrant workers began entering the workforce in Michigan - primarily in the sugar beet industry. (Source: Los Repatriados)

By the late 1950s, the migrant farmer population increased to more than 100,000 - mostly through government programs like the Bracero Program. The Bracero Program was established under the executive order called the Mexican Farm Labor Program in 1942. This allowed millions of Mexican men to work legally in the United State on short-term labor contracts, according to the Library of Congress.

In 2000, migrant workers were in the production and harvest of 45 crops that had an estimated field value of $2 billion, according to a 2002 study done by Michigan State University. The Michigan Employment Agency says the estimated total of farmworkers needed to perform seasonal agricultural work between 1997 and 2001 was 50,300. It was estimated in 1997 that the Migrant Services Program for Michigan had a migrant agricultural labor force of 45,000 - making the state the nation’s fifth largest user of transient migrant workers.

The agricultural field is able to employ migrant workers through the H-2A Visa Program.

In a 2021 article, MLive states that the number of applications for H-2A visas increased 157% in the last five years and quadrupled in the last decade in Michigan. According to Michigan Farm News, there were 11,376 H-2A positions certified in Michigan in Fiscal Year 2021 - ranking us seventh overall. This is a 3.6% increase from previous years.